Plants need ample light to thrive and in any garden, outside they receive plenty of intense light from the sun during daylight hours. This changes throughout the year, reducing to close to twelve hours in the middle of winter depending on location and much longer during summer. These light cycles are utilised by different plants in a variety of ways to initiate or prevent fruiting and vegetative cycles. Something that can be controlled in an indoor situation to enhance and extend these periods or simply grow things outside of their regular agricultural season. Because indoor gardeners are not able to utilise the plentiful free light provided by the sun, artificial lighting must be installed that allow the ability to control these lighting periods to provide the seasonal changes that the user decides is most beneficial for the particular plant at that time. Each lighting technology comes with its own benefits and pitfalls, the rising star of recent years has been Light Emitting Diodes (LED). What was once looked at with suspicion, and for good reason, products have become available that are finally competitive with the value seen in other more commonly trusted lighting products. In its early stages of development for various reasons, one of the most commonly reported problems with LED fixtures was a general lack of plant health and noticeable drops in yield. Even though many of these early lights often provided vigorous growth rates, the lack of broad-spectrum light as is delivered by the sun is generally attributed to these common problems that people were experiencing with the LEDs. These failures actually became very beneficial to the indoor agricultural industries, as they initiated research that has since deepened our understanding of how and when plants use light at various wavelengths to make new products that are as effective and affordable as possible. Demand for effective products in the LED segment has also helped drive the development of more affordable diodes to be made that can provide both better power output and more effective light spectrums. At the time of LED grow lights first being developed, the general understanding of how plants utilised light was that they mostly used red and blue for growth and photosynthesis and very little of other colour frequencies on the spectrum. Both of these colours, particularly red happened to be of the cheapest colour diodes to manufacture at the time, which meant good things for the affordability of LED grow lights and these kinds of "blurple" lights, combining blue and purple diodes across a panel became the dominant products that were available in those early stages of development. These quickly became referred to as many different names such as "spiderman lights" and were both favoured and hated by many from all over the world, dividing populations of indoor cultivators.

After this initial influx of cheaper technology, the natural improvement of products, especially after not immediately being adopted universally encouraged further understanding about what exactly the plants were missing while not receiving these other colours in the spectrum. The extra colours that help make up the light provided by sunlight that has been available to outdoor agriculture for centuries. This initiated addition of various coloured diodes to the arrays that formed LED grow lights and their names changed to include the term "full-spectrum". While this provided extra benefits to growing under lights that only provide red and blue, the benefits were still not anywhere near being competitive with the sun or other forms of indoor lighting available. This full-spectrum term was coined to show just how "close" these lights were to emitting the same light as the sun, which emits light from all of the colours in the visible spectrum as well as light that cannot be seen by the human eye. This light can effectively be described as white light, as it contains all colours to the point of human eyes not being able to discern any particular colour being emitted and the human eye reconciles this as white or clear in colour and illuminating all other colours in its brightness. Fortunately, during this time the manufacture of Light Emitting Diodes became cheaper with new materials allowing higher light output efficiency and made white light diodes, which were once expensive to make to the same output specifications per unit of electricity compared with cheap and simple red, blue and various other coloured diodes that could be made to higher light output specifications at a cheaper price than white diodes at the time. You may have noticed the general price drop and availability of household LED bulbs during this same period of time, as common technologies moved away from filament bulbs such as halogen (that work in similar ways to HPS, MH and CMH bulbs) towards Compact Fluorescent Lights (CFL) and now in recent years to LED bulbs. This cost and manufacturing capabilities prevented LED grow lights from being competitive with previously more reliable and trusted lighting technologies such as the High Pressure Sodium (HPS) and Metal Halide (MH) lamps that have been used indoors for many years.

Where LED is at now:

As the technology continues to advance, so too does the potential output of Light Emitting Diodes per watt of electricity used. New materials being used for making diodes and technologies such as Chip On Board (COB) style diodes allowing for greater percentages of energy used to be turned into useful light for the plants rather than heat. In general, LED technology has been advancing at a rapid rate since their initial introduction and these high output white diodes have now become the standard. With more and more companies are jumping on board to provide products that provide light closer to what is provided by the sun and having a longer life than other HID lamps become an invaluable investment for indoor growing in all situations. The benefit becomes most evident when considering the output capabilities of LED, where the equivalent light output is often almost double the wattage used, similar to the increased output reported by Ceramic Metal Halide (CMH) lamps. This holds benefits for the amount of HEAT created by the unit, where instead of creating the heat that 600 or 1000 watts of electricity produces, the LED light will only be using approximately half of this electricity for a similar amount of useful light being emitted. This can be deceiving for some new customers using LED grow lights for the first time, as many publications state that they are "so cool" or "don't produce heat" which is on the right track but not entirely accurate. The amount of electricity passing through an appliance is generally where most of the heat is produced by that item, and some new LED lights are still using quite high amounts of electricity. Such as the Spectrum King 402 which uses 400watts. However, as this light is producing an amount of useful light to the plants comparable to a 1000Watt HPS fixture, this is where those statements of being "cool" come from. As an SK402, for example, will be producing a similar amount of heat as a 400W HPS, but creating an amount of light similar to a 1000W HPS unit.

Are LED grow lights worth it? With reduced heat production from less electricity used to produce the same amount of light, the reduced electricity usage becomes an easy indication of the immediate savings provided by using LED technologies. On top of this, the cost to regularly replace the lamps of HID fixtures can get costly in the long term. This regular replacement of bulbs is easily avoided when using LED grow lights as Light Emitting Diodes generally have an effective output lifetime of up to 80 000 hours. With companies such as Spectrum King even offering light output warranties for the first 3 years of use that the light output will not drop below 90% of their initial brightness. 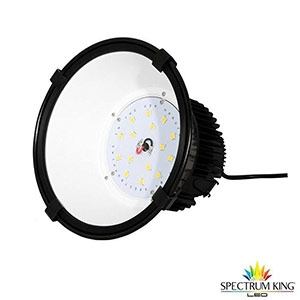 Why Invest in LED?

Good quality LED lights have a higher upfront investment but they offer many benefits that make the expense worthwhile in the long run. Here are some of the most important benefits of these lights.

What are the alternatives to LEDs for indoor growing? If you want something that has similar efficiency as LED, you should consider CMH (LEC) lighting - Light Emitting Ceramic. It’s a HID lamp that produces a more even colour temperature of light than HPS. This means it has a better likeness to the suns's light spectrum, resulting in healthier plants. It also creates less heat than HPS lights due to lower power consumtion, like LEDs, although they produce heat similarly to HPS units. 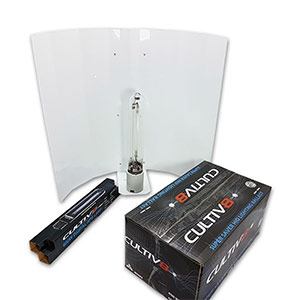 For the cheapest options, HID lights called Metal Halide and High Pressure Sodium are the cheapest upfront, but do make more heat and use more power.

And for plants which are less light hungry, compact flourescent grow lights are the way to go. Click here to see our range of CFL's. 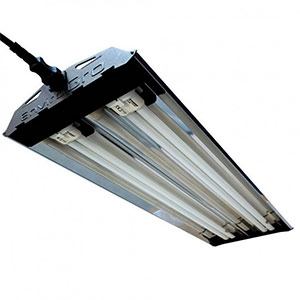