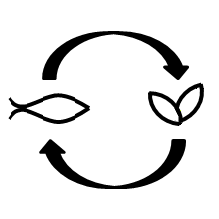 How to get the right balance

Aquaponics water testing is the process of testing ammonia, nitrite, nitrate and pH levels in an aquaponics system to ensure that the plants are getting the proper nutrients and fish have clean water to live in. In this article we explain how to test the different parameters and how to adjust them when they get out of balance.

The pH level in aquaponics is a measure of the acidity and alkalinity of the water. It is important to check pH because aquaponic fish, plants and bacteria prefer a particular pH. Fish and bacteria prefer a pH between 6 and 8, plants however will absorb more nutrients if the pH is between 5.5 and 6.5. It is generally accepted the best pH for an aquaponic system is between 6 and 7, with 6.5 being the ideal. It is important to check the pH every week as the system matures, after such time a pH trend can be seen and testing can be done once a month. The API pH Test measures from 6 to 7.6, if the pH measures 7.6, the high range pH test can be used to measure between 7.4 and 8.8 to accurately determine the pH. If you are getting readings below 6.0, a hydroponic test kit, such as the Hygen pH test kit, will measure down to 4.0.

In aquaponics, the fish release ammonia into the water from their gills, urine and excrement. Ammonia damages gill membranes and prevents respiration. It also reduces their immune system, thereby increasing the chance of disease. It is recommended to test ammonia in the early stages, usually every few days for the first month, as the system matures ammonia should only need to be tested if the fish lose their appetite or acting unusual. The API Ammonia Test measures from 0.25 to 8.0ppm of ammonia, this test also measures ammonium, a less toxic form of ammonia.

Beneficial bacteria in the filter and grow bed convert ammonia into nitraie. Nitrite reduces the blood's ability to carry oxygen. It also reduces the immune system of a fish, thereby increasing the chance of disease. It is recommended to test nitrite in the early stages, usually every few days for the first month, as the system matures nitrite should only need to be tested if the aquaponic fish lose their appetite or are acting unusual. The API Nitrite Test measures from 0.25 to 5.0ppm of nitrite.

The beneficial bacteria in the filter and/or grow bed convert nitrite into nitrate. Nitrate is far less toxic to aquaponic fish than ammonia and nitrite. However at a high level it can reduce their immune system, thereby increasing the chance of disease. It is recommended to test nitrate each week in the early stages, then each month as the system matures. The API Nitrate Test measures from 5 to 160ppm of nitrate.

Calcium and magnesium make up general hardness, both these minerals are essential for the health of fish, plants and bacteria. Carbonates of different minerals, including calcium, magnesium and potassium, make up carbonate hardness. Rain water is pure and does not contain minerals. Adding Potassium Bicarbonate  and Bloom Cal-Mag to rainwater will raise GH and KH to a level which is suitable for Aquaponics.

Water in an aquaponics system is often low in potassium; plants show this deficiency with dying leaf edges and holes in older leaves. This deficiency is due to aquaponic fish food not containing a surplus of potassium to supply enough nutrients for both fish and plants. Potassium is important because it is involved in the respiration and carbohydrate system, which if functioning properly supports a healthy plant. Potassium can be added to an aquaponic system in either organic or inorganic form. Foods such as spinach, chard, kale and soybeans are rich in potassium and can be added to home-made aquaponic fish food to introduce organically-encapsulated potassium into the system. Alternately, Potassium Bicarbonate or Potassium Hydroxide (Hy-gen pH Up) can be added.

Potassium Bicarbonate is a food grade supplement used in horticulture, which will also prevent the pH from falling too low. Use 1 teaspoon of potassium bicarbonate per 100 litres to raise potassium by 10ppm, when required. As each aquaponic system varies, the amount of potassium to add will vary according to the plants that are growing.

Potassium hydroxide is a hydroponics pH raiser that adds potassium to your system but does not add carbonates. Use with care, as this product is caustic and highly concentrated.

This is another nutrient which is often low in aquaponics. As with potassium, the reason for this is due to fish food not containing enough iron for both fish and plants. Plants show iron deficiency by growing yellow leaves with green veins. Iron is a vital element for plants, it has a number of important functions in the overall metabolism of the plant and is essential for the synthesis of chlorophyll. Also like potassium, iron can be supplemented organically and inorganically. Liver, soybeans, lentils, spinach, chard and kale are rich in iron and can be added to home-made fish food. Growth Technology Chelated Iron supplements iron in an inorganic form, it is a food-grade nutrient for hydroponics but can also be used for aquaponics at a reduced dose. Use 5ml of Liquid Iron per 100 litres to raise iron by 0.5ppm, test and dose as required.

Iron, Manganese, Boron, Copper, Zinc and Molybdenum are the main trace elements needed by plants in an aquaponic systems. If Iron and potassium are supplemented and there are enough macro nutrients (nitrogen, phosphorus, calcium and sulphur); it may be the limiting factor. Growth Technology Liquid Trace Elements is food grade and can be used at a decreased dose of 0.25ml per 100L; this will raise iron by 0.25ppm. Use weekly.